Two historic events this fall – the 20th anniversary of 9/11 and the end of the war in Afghanistan – offer an opportunity to reflect on what more can be done to support America’s military veterans and their families.

“Washington State University has a proud history of educating active, former and retired members of the armed forces,” WSU President Kirk Schulz said. “In the years since September 11th and the subsequent military actions that followed, WSU has provided increasing support for our student veterans and their loved ones in steadfast recognition of the sacrifices they’ve made for our country and the promise of their continued contributions as they transition back in to their civilian lives.” 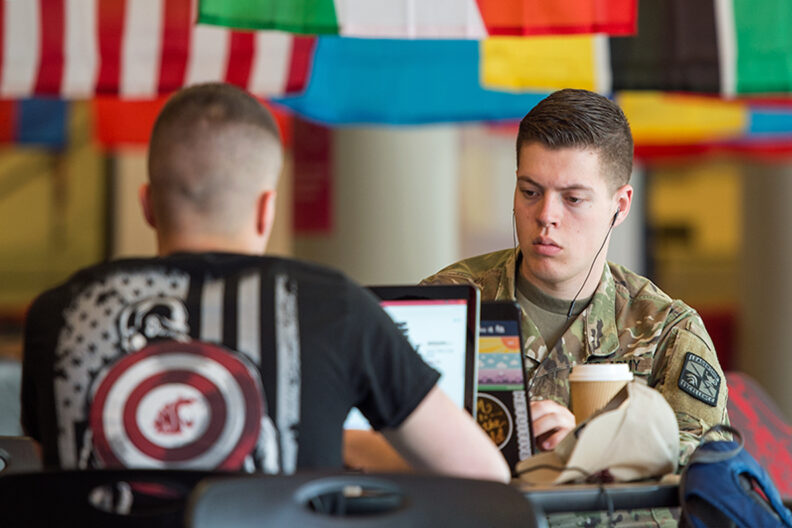 There are around 1,500 students on the post 9/11 G.I. Bill attending classes across the WSU system. Pullman alone has more than 1,100 students enrolled who are veterans or military affiliated.

Student veterans can face barriers to attaining their educational ambitions that don’t exist for the average student as they transition from life in the armed forces to civilian life. Because of these barriers, student veterans and active service members are 13% less likely to persist year-to-year and 20% less likely to graduate than the overall student population.

“We have a number of initiatives in the works that will enhance our current offerings for student veterans,” Nolan said.

The university has a longstanding Office of Veterans Affairs, which employs staff across the WSU system. Physical spaces for veterans to seek help, ask questions or simply to study or hang out with friends exist on every campus. WSU Global has been a resource for active duty service members deployed across the globe since its launch in 1992.

After establishing its Student Veterans Center in 2014, WSU was recognized for its efforts by the Washington Department of Veterans Affairs. WSU has also been recognized as a Military Friendly school by VIQTORY, a service-disabled, veteran-owned small business that evaluates schools and employers on their efforts to create opportunities for veterans.

Thanks to a 5-year, $1.5 million grant from the U.S. Department of Education, the Office of Academic Engagement launched a new Veterans Student Support Services program in September 2020. Its team works with the Veterans Affairs team to assist student veterans succeed in the classroom, provide mentoring opportunities and assist with securing financial support.

WSU recently formalized the Veteran and Military-Affiliated Students Task Force, a group composed of representatives from every campus. Its goal is to further enhance the student veteran experience at WSU, with members looking to bring several national programs to WSU campuses.

That includes VetSuccess on Campus, a Department of Veteran Affairs program that puts counselors on more than 100 campuses to help student veterans get medical referrals and ensure accommodations for those with disabilities. WSU is the first university in the state to bring this program to a campus, Nolan said. Several campuses are also working with their local Veterans Affairs offices to bring in counselors and therapists to serve veterans and their families.

In March, the task force hosted its second WSU Veterans and Military-Affiliated Students’ Symposium, which boasted panels, workshops and a roster of speakers. The symposium was helped off the ground by the patronage of Scott Carson, a WSU Regent and namesake of the Carson College of Business. The Air Force veteran actively supports the veteran affairs team at WSU in enhancing the student veteran experience, Nolan said.

Bringing more exposure to student veterans by sharing their stories and hosting nationally prominent programs at WSU campuses will help to make the university an even more accepting place for this group in the future.